Outdoor games for kids are ones that can be played by everyone and help connect kids with nature. Together, games and the outdoors bring out the humanness and natural sensitivities in children. As a result, they learn how to be spontaneous and out of that spontaneity arises freshness, creativity and the feeling of aliveness that every child yearns for.

These great outdoor games for kids give children a wider experience. They help kids understand that challenges can be fun, that risk-taking and safety can co-exist, that nature is safe, fun and deserves respect, and that indeed, there is room for cooperation and competition in the same game. 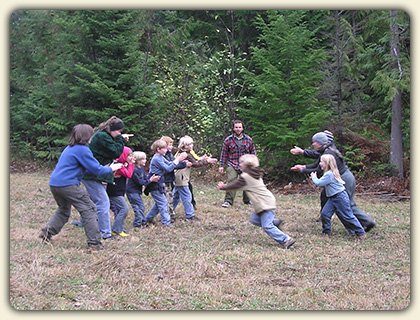 Number of People: Four or more (best with ten or more)

How to Play: Arrange the kids into two teams. Establish a safety zone behind a marked line for each team. The two safety zone lines should be parallel, and about 40 feet apart. Each team huddles up to decide if they want to be a bear, a salmon, or a mosquito. Each team then comes up to face the other in two parallel lines close to the center. On the count of three each team then holds their stance of what they chose. Bears put their arms up and growl, salmon put their hands together and mimic swimming, and mosquitos point their index finger from their nose and buzz.

If both teams chose the same, they start over. If one team chooses a creature that would eat the other, that team then chases the other back to their safety zone. If someone gets tagged before making it back to safety, they leave their team and join the other. Bear eats salmon, salmon east mosquito, mosquito eats bear. The posture and sound of the bear, salmon, and mosquito need to be established before the game begins so that everyone recognizes the stance and everyone can do it the same.

Here at Twin Eagles Wilderness School, this is one of our favorite outdoor games for kids, especially amongst six to ten year old's.

How to Play: Create two even sized teams of people and establish a central landmark easy to locate from far away. Have both teams go off in opposite directions. Use a loud raven call to start the game. Both trams then sneak toward the central location without being seen. At the same time, teams are trying to spot the other team and call them out. The first team to spot any member of another team wins.

This game demands rapt attention and slowness. It is super fun for kids who can really go there, and is a great game to motivate kids to develop their stealth and awareness. Often times players have intimate encounters with wildlife when playing this game because of how quiet and aware they are being, much like the native scouts of old. This quality makes this one of the most special outdoor games for kids we play at Twin Eagles Wilderness School youth programs and summer camps.

How to Play: Create a circle of people with one in the center as coyote. Coyote guard's her cache, a tied up bandana in the center. All the other players are trying to steal coyote's cache by grabbing the bandana without being tagged. Players get three "lives", losing a "life" each time they are tagged by coyote. After that they are out. Coyote wins if he successfully defends his cache, otherwise the player who successfully grabs her cache wins, and becomes the next coyote.

Of all the great outdoor games for kids that we play at Twin Eagles Wilderness School, this one is a very high paced game that requires good reflexes and awareness. Teamwork is often the key to getting coyote's cache. 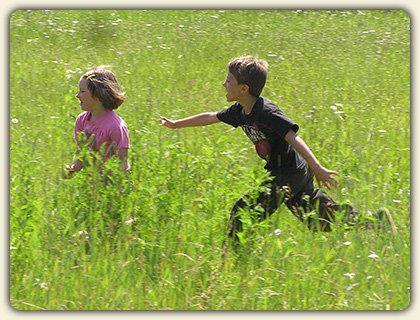 Number of People: Two or more (better with at least eight)

How to Play: Choose one person to be a leopard for every four people who are humans. Each leopard gets some "meat", a bandana, to guard. The leopard's meat should be placed where everyone can reach it in a low tree branch or shrub. All the humans try to steal the leopard's meat. They start the game at a starting point a good distance away from the leopards, say 75 feet or so. They try to run in and grab the meat without being tagged by the leopards. If someone is tagged by a leopard they must return to the starting point before continuing to run back into the game. The game ends when all the leopard's meat has been stolen and taken back to the starting point. It may help to have a rule keeping the leopards at least five feet away from the bandanas until they are stolen.

Of all the great outdoor games for kids we play, this once is particularly steeped in the lineage of Twin Eagles Wilderness School. This game is based on a story from Ingwe, one of our early and foundational mentors. Ingwe was mentored by the Akamba tribe in Africa, and used to tell us stories of how he and his childhood mentor Ndaka would steal cached meat from leopards in the African wilderness. We love to share this story with our students to inspire them before playing this game.

Number of People: Two or more

How to Play: Start by pairing players up. One person is the photographer, while the other is the camera. The photographer chooses something in nature that they want to take a picture of. Once they have chosen their picture they take their "camera", their blindfolded partner, over to take a picture by positioning them exactly as they would a camera, then removing the blindfold for just ten seconds while the "camera" savors the beauty of the image.

This games helps bring players to a greater awareness of the beauty of nature so often times missed by busy lives. Like many of the great outdoor games for kids that we play at Twin Eagles Wilderness School youth programs and summer camps, this one asks us to slow down and move at the speed of nature, which is such good medicine for us all.

Want more games like these? If so, then you should take a look at these articles, Fun Outdoor Games and Kids Outdoor Relay Games

If these games are appealing to you, consider checking out Twin Eagles Wilderness School Youth Programs or Summer Camps. Take a look and then contact us for more information and next steps.

comments powered by Disqus
Return from Outdoor Games for Kids to What is Mentoring?

Return from Outdoor Games for Kids to Wilderness Survival (homepage)