Native American mythology contains ancient stories of lore in which survival knowledge, traditions, cultural origins and more gets passed on from one generation to the next. As an oral tradition, Native American myths are best shared live where the storyteller doesn't just share the story, they bring it to life. The legends are rich with many layers of meaning, which offers the listener different lessons depending on their current state of mind and heart, and also depending on their current stage of life. As a person moves through the years they hear and understand more layers to the stories, and the true heart of Native American mythology is revealed. 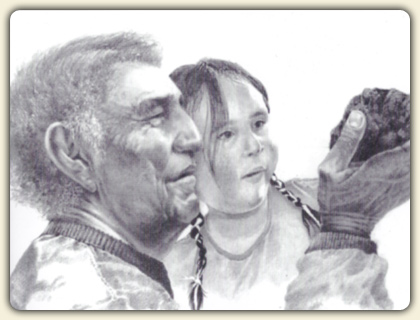 Native American mythology serves many other purposes as well. Native American myths and legends define codes of conduct and taboos with the natural world, they provide comfort for the often unpredictable aspects of life, they answer the universal human questions within all of us such as "Who am I?" and "Where do we come from?", and they hold instructions for all sorts of important things we need to know as we walk through life. In these Native American mythology, animals can often come as messengers or change form in order to actualize something greater. The very nature of this kind of phenomenon goes deep into the spirit or psyche and can call forth change within us in order to achieve greatness.

There are many characters in Native American mythology that mirror parts of who we are. Heroes come in many forms and with versatility their characters step forward as catalysts to show us how to live respectfully and to the fullest. Other times we are taught what not to do by coyote and others. Obstacles in Native American mythology can exemplify our own troubles and challenges in life and show us how to overcome them. Complexities are offered with solutions that we can grasp beyond the mind.

There are many ways in which Native American mythology provide opportunities for guidance and healing. The simple act of listening to myths and legends restores us both personally and culturally. We are given insight into the patient mystery that all is not as it may seem. They offer us new perspectives in how to solve problems and illuminate the invisible aspects and veils in our lives. Their morals and meanings bring us faith and hope and give voice to the unnamed complexities, all of which leads us to greater self-awareness and personal empowerment as we learn to navigate grief, trauma, confusions and all the other rapids in life.

There was once a boy with a great gift. He was to be one of the great hunters in his village. When he was born, his grandfather made him a bow and arrows, a tomahawk, and a knife, and taught him how to use them. When the boy came of age, his grandfather taught him how to use the bow and arrows, to hunt certain animals, and as he got older everyone became aware of his gift.

One day he went out hunting. His parents expected him to return but he did not come home that night. A meeting was called to select the greatest trackers to find his trail and track him down for they feared the enemy might kill or attack him.

The trackers followed his trail. It came to a dead end and there a staff was stuck in the ground. They searched the entire area but found nothing that would tell them more. They returned to the village and reported their findings. The next day, the greatest warriors and horsemen searched out where he might have been killed by the enemy but still found nothing.

The family was worrying about their lost boy. They were sad for they felt he was dead. Someone then walked into the tipi. They all looked up and he had walked in. The news spread around the village. They knew something strange had happened to him and they wanted to know what happened. It was the custom to sit down in ceremony for him to tell his story. And so they held a ceremony for his sharing. And here is his story.

He had gone out hunting for game but there was none to be found. As he was walking at the foot of the mountains, where he could see miles off in the distance, he heard a swishing noise. It was the air swooshing down upon him and just as he looked up, something grabbed hold of him. He saw the greatest claws on the largest eagle he'd ever seen. He grabbed hold of the eagle's legs, but the eagle was so powerful, he had no chance to fight it off. The eagle lifted him and away they flew. The eagle spoke to him saying, "Do not be afraid. I know you are a great hunter and I am in need of your help."

When they landed in the eagle's nest they found two baby eagles nestled in one corner of the nest, afraid of the hunter. They were assured not to be afraid of this hunter who would protect them. The mother eagle then shared her story of why the hunter was brought to the nest.

"I have tried to raise a family here for many springs, but when they reach the age they are now, there is an animal that comes to kills them and eat them. I know you have the power of a great hunter and I brought you here to kill this animal. When it comes this time, you will prepare for him. In the meantime, I will go out to get meat to bring back so you can eat with our family."

For several days the mother and father eagle brought in antelope and other meat which the hunter made into jerky for all of them. Being high up on the bluff, he saw his people trail him but could do nothing.

One day getting toward high noon, as far as you can see, where the eagles soaring making screeching noises, the father eagle swooped down close to the nest and said, "He will come from the edge of the cliff, south from where you are sitting."

The baby eagles fearfully huddled in the nest making screeching noises. The father eagle flew to the nest saying, "He is getting nearer." The young hunter knelt down inside the nest. With bow and arrows he aimed to where the eagles told him the animal would be. Out of nowhere a huge head, which looked like a bears head, lifted up so fast that the young hunter could not tell what it was but he instinctively knew right away the animal would lift his head up again. He released his arrow and it hit the animal right between the eyes just as he stuck his head up once more. When the arrow hit, the animal straightened up and fell over the cliff. The mother eagle made the tremolo sound and the father eagle sang an honor song as they soared the skies. Then they both landed in the nest and the father eagle said, "You have killed the biggest snake which has killed my family for many years. From now on, you will be guided by the eagle people, your power shall be strong and no danger will fall upon you as long as you live. In a few days my children will return you where I found you when I brought you here," and gave him feathers for war bonnets as a gift.

When the time came to leave the nest, the hunter described how he grabbed the legs of the young eagles and stepped off the cliff. At first, their wings came down but the father eagle pulled them up to gain altitude and the young hunter was returned to the place where the eagle had first found him. 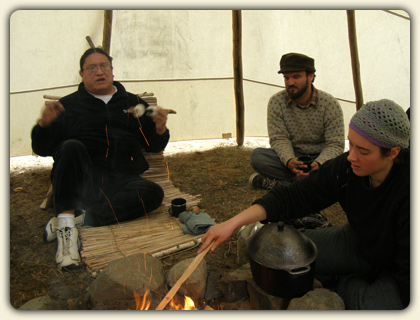 Sasquatch is the common name for the human-like giant that is said to dwell in the mountains from California all the way up to Canada. Long ago a warring tribe came down from the hills and attacked another band of Indians. Many of them died and they fled their village.

To survive this attack they paddled in canoes across Skagit Bay to Whidbey Island. It was there that they joined another band of Skagit Indians who lived there. This band of Indians had formed a very mysterious method of hypnosis. By undergoing hypnosis they were able to see in the dark. They were also able to become invisible to other people that were not of their tribe. In gaining mastery in this practice they eventually evolved into a different style of people. They became ape-like in their exterior and they got to be as large as giants. They continued to be a peaceful people. Despite all this, they feared strangers and would flee from them and hide. When approached by strangers they had a habit of making themselves invisible for many days.

Of late, it has been said by the Indians that the Sasquatch have grown in size and strength. Their bodies grow more hair and through their abilities for hypnosis they have become so powerful that they can uproot trees. Although they are reported to be a peaceful people, it has been warned not to bother them if you happen to encounter one, for one never knows what they might do.

We come from a rich history of myths and legends from cultures around the world. If you are looking for more stories, be sure to check out our other page, Native American Legends.

Here are some additional resources for you as you continue to discover and enjoy the treasures of Native American mythology:

comments powered by Disqus
Return from Native American Mythology to What is Mentoring?